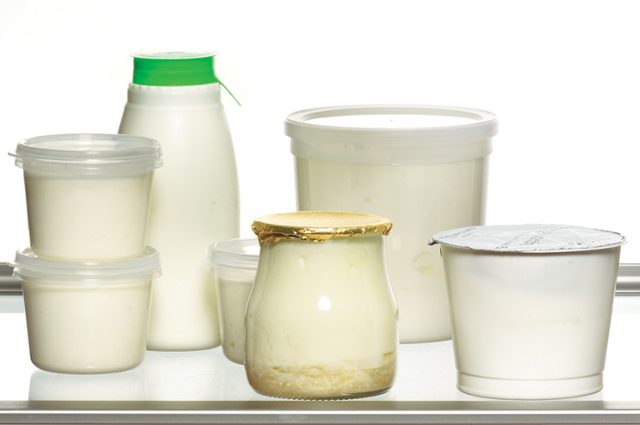 What's So Great About Yogurt?

Americans of a certain age might remember a series of yogurt commercials that aired in the mid-1970s. “In Soviet Georgia, where they eat a lot of yogurt, a lot of people live past 100,” a deep voice intoned over images of elderly peasants enjoying yogurt. The campaign, which became legendary in the advertising world, helped turn around the fortunes of Dannon in the United States and establish yogurt as a “health food” in the national consciousness.

Forty years later, yogurt is a $7 billion industry in the United States. In 2010-11 alone, more than 600 new yogurt products came on the market. “When you walk into the yogurt section of the grocery store, it’s like going to a museum,” says Tufts biologist Benjamin Wolfe, who studies the microbial activity of fermented foods. And in survey after survey, consumers say the healthfulness of yogurt is top among the reasons they eat it.

Research confirms yogurt consumption correlates with a host of health benefits. Yogurt-eaters are more likely to have lower blood pressure and lower levels of circulating triglycerides (considered an indicator of heart health) and blood glucose. Those who consume more than three servings of yogurt per week appear to be better able to manage their weight.

But scientists caution that it’s still far from certain that yogurt produces these desirable outcomes. “There’s some interesting evidence that suggests yogurt might be related to certain health benefits. But we still have a long way to go to determine that these associations we’re seeing are, in fact, causal,” says Professor Paul Jacques, a senior scientist at the Jean Mayer USDA Human Nutrition Research Center on Aging (HNRCA) at Tufts.

“One thing we do know is that yogurt is a good source of nutrients,” he adds. Yogurt is indeed a vitamin-and-mineral-dense source of high-quality protein, which may be why yogurt-eaters are less likely to be deficient in vitamins B2 and B12, calcium, magnesium and zinc.

Beyond the Nutrition Facts label, though, there is still a lot to understand about yogurt. Researchers are looking at the connections between yogurt and conditions as varied as immune response, infectious disease, susceptibility to cancer, inflammatory markers, cardiovascular and metabolic risk factors, energy metabolism and cognitive function.

The yogurt industry, for its part, is helping that research along. Both Jacques and Professor Simin Nikbin Meydani, director of the HNRCA, sit on a scientific advisory board for Dannon, which has helped fund some of Jacques’ yogurt studies.

Much of the work at the HNRCA and elsewhere has been observational, examining yogurt consumption within populations and how it correlates to various health markers. Several Tufts studies, for instance, have been based on data amassed in the landmark Framingham Heart Study.

Meydani says it is time for the next step. “We need more interventional studies,” she says. “There is a lot of benefit to be gained through observational and epidemiological studies, but there comes a point where we need to determine the efficacy of foods through clinical trials, and I think that’s what’s been lacking. What we hope to see is a lot more research that would actually show these health benefits that have been attributed to yogurt.”

Basically, yogurt is milk that has been fermented using bacterial cultures. For a refrigerated product to be labeled as yogurt under U.S. Food and Drug Administration regulations, it must be cultured using Lactobacillus bulgaricus and Streptococcus thermophilus, although other bacteria may be included. (This criterion does not apply to frozen yogurt or “yogurt products,” such as candies or dips.)

A trade group, the National Yogurt Association, has created a “Live and Active Cultures” logo to identify products that meet a certain threshold of those two bacteria, but regardless of the marketing, all yogurt needs to start with live and active cultures for the yogurt-making to occur. (Some manufacturers heat-treat their yogurt after fermentation to prolong shelf life or decrease the tart taste, which deactivates the cultures.)

Yogurt has a much higher concentration of protein, vitamins and minerals than milk—anywhere from 20 percent to 100 percent more—part of the reason it’s regarded as a dietary powerhouse. The acidity of yogurt also makes it easier for the body to absorb such nutrients as calcium, zinc and magnesium. Another bonus is that the bacteria break down the sugars in the milk, making yogurt a food that can be more easily digested by those with lactose intolerance.

If more Americans would eat yogurt, says Meydani, it would go a long way toward filling the nutritional gaps in our diets. For instance, two-thirds of Americans do not meet the recommended dietary guideline of three daily servings of low-fat or nonfat dairy products, according to the National Health and Nutrition Examination Survey.

“The general population is missing the boat on many markers of nutrition,” Meydani says. According to the Dietary Guidelines for Americans, calcium, potassium and vitamin D are considered “nutrients of concern” for Americans at large, and all are amply supplied in yogurt, assuming it is made from vitamin D-fortified milk.

Help for the Elderly

In particular, yogurt is a good candidate for addressing nutritional deficits in the elderly, Meydani says. Maintaining bone health is a top concern for older people, and yogurt’s rich amounts of calcium and vitamin D (if fortified milk is used) address that. Data from the Framingham Heart Study Offspring Cohort indicates that eating more than four servings of yogurt a week is associated with greater bone-mineral density and protection against hip fracture; the same was not found with similar consumption of milk or cheese.

“It’s a very convenient food, and it can be eaten easily, even if you have problems chewing,” which also makes it ideal for older people, Meydani says.

Jacques and Huifen Wang, formerly of the HNRCA’s epidemiology department, examined data from the Framingham studies to see if there was a connection between yogurt consumption and weight. Their findings suggest yogurt could be helpful, if not for weight loss, then at least for weight maintenance.

The data, published in the International Journal of Obesity in 2014, showed people who ate more than three servings of yogurt a week gained less weight over the course of a year than those who ate less than one serving.

A meta-analysis by Jacques and Wang of existing research on yogurt and weight, published last year in the American Journal of Clinical Nutrition, also found that yogurt-rich diets were associated with less weight gain over time. The same association was not true for consumption of low-fat or nonfat milk. And comparable consumption of whole milk and cheese was associated with weight gain.

“Some people have speculated the relationship between dairy and weight maintenance is due to calcium or other factors in the dairy itself,” says Jacques. “But based on the fact we see a difference [in the data] between yogurt and other forms of dairy, we could speculate it might be unique to the fermentation, or to the live bacteria themselves, or to various products of the fermentation that aren’t in other forms of dairy.”

The live bacteria in yogurt may affect the vast array of microbes that inhabit our intestines. The question of whether these bacteria can establish colonies and thrive on their own in the gut or enhance the growth of pre-existing beneficial bacteria—and if so, how this relates to body functioning—is what scientists are now grappling with.

“The idea that cultured products have good bacteria in them that can somehow impact bacteria that live inside our digestive tract, that is a big question mark,” says Wolfe, an assistant professor of biology in Tufts’ School of Arts and Sciences. “There are still lots of missing pieces to link together about the role of microbes in cultured food and its impact on human health. What’s exciting is there is so much potential.”

Curiosity over the connections among cultured foods, gut bacteria and overall wellness is not new. As far back as the late 19th century, the Nobel prize-winning scientist Elie Metchnikoff speculated about the causes of senility and other effects of old age, and promoted daily doses of “soured milk”—i.e., yogurt—as a way to stay mentally fit. In fact, his interest was spurred by the longevity of Eastern Europeans who ate a lot of yogurt. (Their descendants, presumably, appeared decades later in those Dannon ads.)

Today, the intestinal microbiome—the ecosystem of bacteria and other microorganisms in the digestive tract—is a significant focus of biological exploration. “The number of gut bacteria is so large that we can’t just think of ourselves as human,” Meydani says. “It’s almost like we’re a hybrid of human and bacteria.” And evidence is accumulating that these bacteria have an effect beyond the intestines. For example, Meydani points to immune response.

“In a way, it’s hard to believe. Why would changes in gut microbiota influence the systemic immune response?” she asks. Yet the gut bacteria communicate with immune cells in the intestinal lining, which in turn send signals to cells in the bloodstream, she says, meaning that all the distant parts of the body are affected by what’s happening in the digestive tract.

“That’s where yogurt comes into play,” she says. If the bacteria from the yogurt are, indeed, able to influence the overall composition of the intestinal landscape, the result could be far-reaching, involving immune response, or susceptibility to certain cancers or infectious disease, or even cognitive functioning.

“The gut-brain connection appears to be a real thing,” says Meydani. “We’re not there yet, to [be able to] say yogurt consumption improves cognitive function, but there is ongoing research looking at that, and hopefully we will hear about that in the next few years.”

In the meantime, she says, the nutritional benefits of yogurt should be enough to earn it a place at the table.

This article first appeared in the Winter 2015 issue of Tufts Nutrition magazine.

Helene Ragovin, a senior writer at Tufts, can be reached at [email protected].

Shopping Smarter in the Yogurt Aisle

The yogurt aisle presents a dizzying array of choices. Nonfat to low-fat to cream-top. Greek-style, Icelandic or Australian. Cow’s milk, goat’s milk or no dairy milk at all.

“Your best bet is to choose yogurt in its most simple, plain form,” advises Alicia Romano, N10, a clinical dietitian at the Frances Stern Nutrition Center at Tufts Medical Center. “Start with plain yogurt and then control what you add.”

While fat content has traditionally been the focus of yogurt labeling and advertising, Romano says what consumers should really be paying attention to is added sugar.

Yogurt naturally contains between 6 and 12 grams of sugar in a 6-ounce serving (the size of most yogurt containers these days). So anything too far above that is something to be cautious about. “Some yogurts have up to 33 grams of sugar. That’s just crazy,” she says.

But what about the fat? “In general, low-fat would be a fine choice for most consumers. A lot of fat-free products tend to add more sugar to get some flavor,” Romano says.

Yogurts marketed specifically to children or toddlers can also be high in added sugar, she notes, so read labels carefully. The same goes for nondairy yogurts, often made from soy, coconut or almond milks. They are likely to be highly processed and may have more added sweeteners and stabilizers to mimic the taste and consistency of dairy yogurt.

And watch for marketing that distracts from nutritional content, she says. For example, organic yogurts are just as likely as conventional ones to be high in added sugar, so while they may be good for the planet, they may not be great for you.—HR